The entire academy moved online where they participated in Musical Theatre classes, worked on radio plays and even made their own films! They also welcomed Head Principal and Founder, Pauline Quirke to the academy via Zoom! Pauline chatted to the kids about the projects they were working on and what else they were up to. 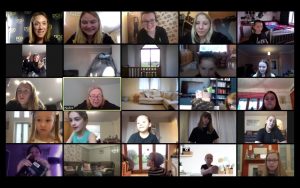