Home | The Poppets Go On Safari!

On Saturday 15th January at PQA Plymouth, our Poppets went on an exciting Jungle Safari adventure! Our Poppets sprung into a world of their imaginations, they put on their Safari hats and binoculars and went on a fun-filled Safari Adventure around our Academy.

Our poppets trekked through the jungle on the lookout for their favourite animals, they wandered through the long grass, waded through the sticky mud, swung on vines through the trees, swam across rivers and found Elephants, Snakes, Lions, Sloths, Crocodiles and many more.

We walked around the space taking on the physical characteristics of their favourite jungle animals and doing their best vocal impersonations too. We then participated in exciting musical animal games and showed off their best Lion impressions in an impressive roaring contest.

It was a thrilling adventure day, with the Poppets exploring physical and vocal characterisation through games, dancing, singing, movement and sound.

We completed their Jungle Safari adventure by putting together a great rendition of ‘Walking through the Jungle’ and we even crowned our first Poppet of the week! Poppets teacher Emma said “I was extremely impressed with how well our Poppets did today, they really used their imaginations and built some strong animal characters. The Poppets picked up the song and dance really quickly and added in their own ideas and animals into the song. It was a fantastic day and it was great to see them growing in confidence from last week. Excellent work Poppets!”

We can’t wait for our Friendship week this coming Saturday! 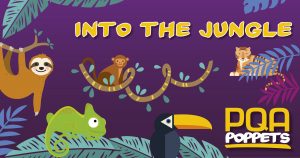