Students from PQA Bedford enjoy performing alongside The Opera Boys

Students from PQA Bedford enjoy performing alongside The Opera Boys

Students from Pauline Quirke Academy of Performing Arts (PQA) Bedford were delighted to be invited to perform with The Opera Boys at The Gordon Craig Theatre in Stevenage on Thursday 28th February, and they enjoyed every minute of their special night.

The Opera Boys are a small elite team of singers including some of the UK’s finest classical tenors. Following their training at London’s Royal Academy of Music, members of The Opera Boys have played lead roles in the West End and on Broadway. Over the past five years, the group has have performed over 1,000 concerts to countless delighted audience members worldwide.

The PQA Bedford students joined The Opera Boys for musical numbers including ‘Angels’ & ‘Oh What a night’ The students also performed by themselves, singing a ‘Greatest Showman Medley’.

Gemma, Principal at PQA Bedford, said “The students were in awe of the Opera Boys in their sound check! The boys were so friendly and welcoming, the students were able to relax and enjoy the excitement of the evening. We were very grateful for such a wonderful opportunity to perform. Thank you for having us Opera Boys!”. 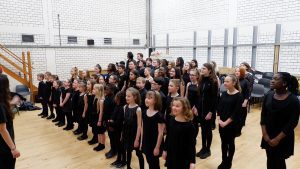 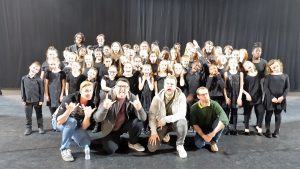