In February, our annual PQA Monologue Slam was judged by film and television actor, Adam Leese!

Adam – the Acting Tutor at The National Youth Film Academy and Youth Mentor for BAFTA – secured his first job on Victoria Woods ‘Dinnerladies’ 20 year ago, whilst in his last term at Arts Ed. Since then he has accumulated over 60 credits in film and Television, both here and abroad. Film Credits include ‘Bridget Jones’ Baby’, and ‘King of Thieves’ (starring Michael Caine and directed by Oscar winner James Marsh). TV credits include several guest appearances on Eastenders, Broadchurch, The IT Crowd and Humans.

The talent was huge in both the AM and PM… everyone was a winner, walking away with feedback and an ‘I Slammed It At PQA’ badge… There were three finalists in the AM, and three in the PM, all of whom will be considered for the national finals by a panel from HQ!!! 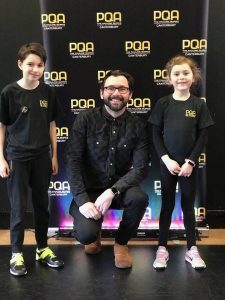 Other news from Canterbury

Layton Sings At the O2!

#TBT – A couple of years ago, Blue Group PM’s Joseph appeared in the ITV…