The students from The Pauline Quirke Academy of Performing Arts in York dazzled their family and friends with a spectacular performance of PQA’s West End show ‘Trouble’s A Brewin’’ on Sunday 8th May.

As part of PQA’s curriculum students have the once in a lifetime chance to perform at the Shaftesbury Theatre, home to ‘& Juliet’, in the heart of London’s theatreland and, for one night only, get to experience the thrill and buzz of performing on a West End stage. PQA York had the freedom to be as imaginative and creative with their part of the show as they liked, from the casting and staging right through to the choreography.

PQA’s West End show is a musical comedy set in a fictional Mid-West town in the 1870s. Sheriff Trifle is on the hunt for a group of bandits who threaten to disturb the peace ahead of the town’s eleventh birthday. The sudden disappearance of fifty big ones means that it’s up to Sheriff Trifle to catch the thieves and save the day.

The Principal from PQA York, James Aconley, said “I am so proud of our wonderful PQA York students. They performed like true professionals on-stage, and also did themselves proud backstage too with their hard work, kindness and supportiveness of each other and the other Academies taking part.”

The experience became even more exciting for the students of PQA York when Head Principal Pauline Quirke arrived to the theatre to watch their rehearsal and meet the students!

The Principal from PQA York, James Aconley, said “It was amazing for the students at PQA York to meet Head Principal Pauline Quirke. Whilst we are a national brand, PQA York is an independently owned performing arts academy in York, I am local, and my team are all local industry professionals working within the arts sector. Events like our West End Show and meeting Head Principal Pauline Quirke remind our team and students that we are part of something bigger, a huge welcoming supportive family which spans all over the UK. I think this is very special.’’

PQA York have now reopened their books for new and potential students as they start on their brand new project – the ‘Red Carpet Cinema Screening’ in which students will create their own films which will be shown on screen at Cineworld later in the year before being entered into Film Festivals. 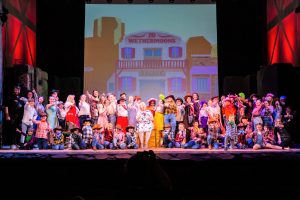