One thing we pride ourselves on at PQA Torbay is working together as a team to combine our three modules to create something epic!

Using all our great teachers to bring out the best in our students. Our Summer School is a prime example – Make a POP MOVIE, which is a fun comedy, a Whodunnit Celebrity Quiz Show. Hosted by Pants & Shrek, featuring Boy band “Two Direction” and Girl band “Little Fix”.

Together we go for it in just three days will dive in after warm-up, they will start to learn the big dance routine, with singing as well as acting workshops and script read through to help us cast later that day.

On the 2nd day we will continue with the big dance routine adding some acting dynamics with the students that have been cast. We will also work on the script and develop the scenes – ready for filming on the last day.

BIG FILM DAY includes a film masterclass – Sound, Lights, Camera, Action! Before we start filming the big dance routine followed by the scenes. Students will use the film equipment themselves and help make the movie as well as perform in it 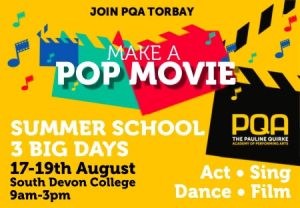