This Remix of a classic comedy includes pop songs, Shakespeare fun facts, rap and even insults. Midsummer is the perfect summer show with Shakespeare in the Park at Lupton House Brixham this Sunday to a sell out crowd.

Pauline Quirke Academy of Performing Arts Torbay (PQA Torbay) based at South Devon College have over 80 Students aged between 6-18 years. They are also excited to be bringing this show to London and as a part of the International Fuse Festival in July at the Rose Theatre, London. You can book tickets HERE

Before doing Shakespeare, PQA Torbay students explored spoken word and rap last year to prepare themselves for beat of the Bard. 400 years on Shakespeare is still trending and the students have a good understanding of his body of work and how he still influences theatre today.

A timeless tale, charged with confused relationships of the lovers, misadventures of the mechanicals, and the conflict between the fairies, A Midsummer Night’s Dream is both enchanting and hilarious.

PQA Torbay will travel to London after Sunday’s performance and take to the stage with this upbeat show, punctuated with well-loved songs and dynamic choreography, with a few fun detours along the way.

On route to their London performance, they will be taking in a quick tour of The Globe – the home of Shakespeare, before taking to the stage later that day.

“ I have three girls who attend PQA Torbay and have had such amazing opportunities over the last few years to perform on the West End Stage and now looking forward to returning to London this summer. The mixture of drama, tv and singing gives the variety and has increased their confidence so much. The staff are so committed and enthusiastic and this rubs off on the children.” Joanne McWilliams

“Lockdown was so tough on children, so its a privilege to give our students such amazing opportunities, to make them feel that the world is their stage, providing skills of life with the confidence and wellbeing for them to flourish” Victoria Whelan, Principal PQA Torbay

PQA Torbay are also thrilled to be launching an afternoon academy this October – https://www.pqacademy.com/academies/torbay/
plus ‘Make A Pop Movie’ Summer School this August. https://bit.ly/MakePopMovie 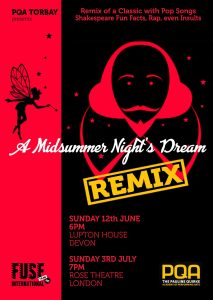