PQA Northampton’s Production of Singin’ In The Rain Jnr Is A Triumph!

Home | PQA Northampton’s Production of Singin’ In The Rain Jnr Is A Triumph!

PQA Northampton’s Production of Singin’ In The Rain Jnr Is A Triumph!

At PQA Northampton the spring term began in earnest, putting the final 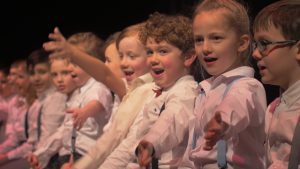 touches and refinements to their production of Singin’ in the Rain Jnr. Their production wowed parents and friends on Saturday 19th January at Spinney Theatre in Northampton.

It was a real fusion of all our modules: Comedy & Drama, Musical Theatre and Film & Television, to bring this wonderful production to the stage through the expert guidance of the staff team. All age groups worked together to tell the story through song and dance, which included musical favourites such as Make ‘em Laugh, Broadway Melody and, of course, Singin’ in the Rain.

“It has not only brought all age groups together, once again, which both students and staff relish, but has also allowed them the opportunity to learn about how film developed as an artistic medium, 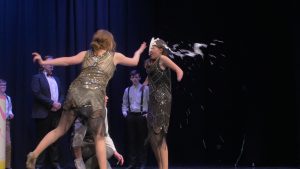 as the story covers the birth of ‘talkies’”, said Principal, Sarah Varnam.

PQA Northampton now looks forward to beginning the Monologue Slam this weekend, before getting stuck into making their own short ‘talkies’.

All this prior to their next production opportunity, which is…..? News coming soon.