We were so privileged to have a visit from the Batman Begins, The Dark Knight and Outlander actor, Colin McFarlane during our session yesterday. Colin gave up his time to come in and talk to the students about his experience in the industry, share some tips and spend time talking to individuals. He even treated us to some of the voices he has done for children’s television characters – including Mr Lion from Peppa Pig and Sparkie The Dragon from Mike The Knight!

We were then enormously fortunate to have Colin judge the Red Group Round 2 Monologue Slam entries and act as executive judge. Colin then spent time giving detailed, extremely helpful and supportive feedback.

Although he had a lunch meeting Colin didn’t rush off, saying they would understand and be o.k to wait – and wouldn’t leave until he had found the student he had promised to have a picture with. What a fantastic role model. 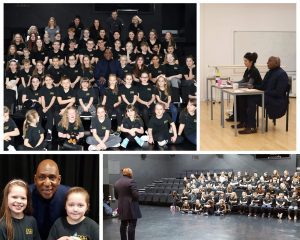 There were lights, cameras and posh togs as our students took to the red carpet…