PQA Earlsfield’s Head Girl Elizabeth appeared on Strictly Come Dancing on Saturday, November 13th when one of the show’s competitors visited Deafinitely Youth Theatre members. Rose Ayling-Ellis, currently starring as Frankie on EastEnders, brought viewers to tears with a powerful dance that she dedicated to the nation’s Deaf community.

Before her performance, the audience watched Rose returning to Deafinitely Youth Theatre in London, where she met current workshop members including our Head Girl, Elizabeth! Elizabeth was lucky enough to interview Rose and discuss the importance of creating awareness of making the Performing Arts accessible to the deaf community.

Deafinitely Theatre is the UK’s first professional theatre company producing bilingual theatre in British Sign Language and spoken English, and we’re super proud of our PQA superstar for being a part of the organisation. 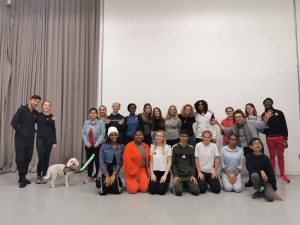 Other news from Earlsfield

PQA EARLSFIELD SHOOT SUMMER SHOWCASE ‘ONCE UPON A TIME’

On Saturday 22nd May students and staff celebrated the Academy’s third birthday! Four of our…