When children from PQA Aylesbury were asked to support The Barricade Boys in their recent UK tour, they jumped at the chance.

With only a 3 hour rehearsal and sound check, the children took to the stage at The Waterside Theatre with the boys and sang Close Every Door from Joseph, alongside Simon Schofield who played the title role in the West End, and A Million Dreams from the recent Blockbuster The Greatest Showman.

The whole evening was fantastic, and according to one ten year old boy, ‘The Best Night of my life’. 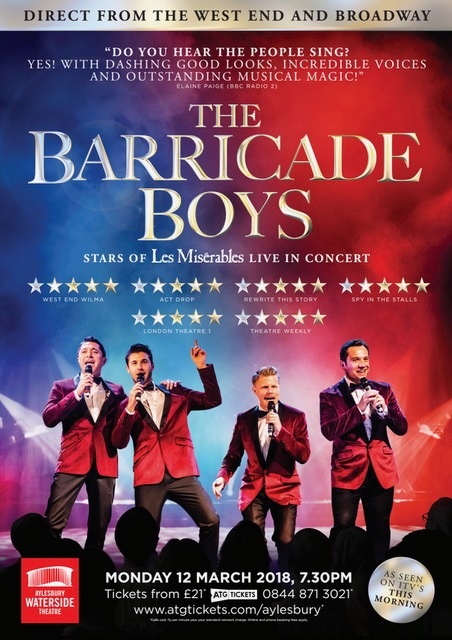 Simon Schofield, Producer and performer with the Barricade Boys, sang the children’s praises and said he would invite them back on their next tour.

A special mention goes to Amelie Bock, pictured with the boys, who sang solo in A Million Dreams.

A standing ovation followed Bohemian Rhapsody and the boys finished with an encore of One Day More, all enjoyed by the children of PQA who were invited to stay and watch the rest of the show.

Kym, Principal of PQA Aylesbury said “When I was asked by Simon to support them in Aylesbury, I jumped at the chance. I love any opportunity work with professionals in the industry and the Barricade Boys were a lovely quartet who welcomed our children to the stage, were supportive and encouraging of them. The whole night was such a success and I can’t wait to do it again.”

Other news from Aylesbury

PQA Aylesbury celebrated their member’s successes in their short films, made during their  Film &…

We made it to the end of term and celebrated Christmas at the academy, as…

Poppets come to the afternoon at PQA Aylesbury!