This Halloween Poppets were told before arriving at academy that a werewolf was on the loose and had stolen their Halloween treats!

In order to save their sweets and catch the werewolf the Poppets had to disguise themselves and Mummies, make it through the spider’s web, uncover clues along the way and distract the werewolf with their brilliant dancing! 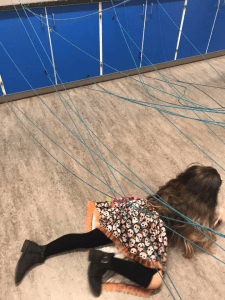 After cinema screenings, performing in the motorpoint at Christmas, film projects and a radio…