In December 2017 I had the opportunity to perform in the worlds biggest panto, Peter Pan with the Quirky Kidz agency.

It all started when I attended the RADA drama workshop in London. We had to sing a solo in part of a song, show a drama piece and learn a difficult dance. In the singing workshop, I must have done something good because later on that month, my mum received an email asking me to audition for Peter Pan.

My mum took me to the audition on a train, and when we arrived, it was time for me to go in. The production team taught us some really hard dance choreography that we had to pick up within forty-five minutes. Once we had mastered it, we all went up in groups to dance the judges. They took some notes and noticed the key things that were needed in the dance. A few weeks later my mum received another email from the production team saying I had got through the audition!

The pantomime took place in the Birmingham Indoor National Arena. It was amazing to be acting in a play with two well-known actors- Bradley Walsh and Martin Kemp. Bradley Walsh played the role of Smee and Martin Kemp playing Captain Hook. I played the extra roles of a pirate, a Victorian child and a lost boy. At first, I didn’t know anyone at all, but during rehearsals, I made lots of new friends to talk to and spend time with. I also learned the very important lesson of responsibility, because it is up to you to learn all your lines and take part. Independence was also key during this performance since you spend lots of time away from your parents and home. Sometimes, I was rehearsing for eight hours a day! This largely increased my confidence because I had to perform in front of twelve thousand people.

On the opening night of the show, I felt a little bit nervous walking on to the big stage for the first time in front of 12,000 people. But when I started doing what I had practised for months, I felt fine. On the second, third and the final night, I wasn’t nervous at all. When a whole lot of shows came to an end, it was a relief. But I would be thrilled to meet the people I have worked with again. I hope I can do another pantomime like this in the future, and make lots of new friends again. 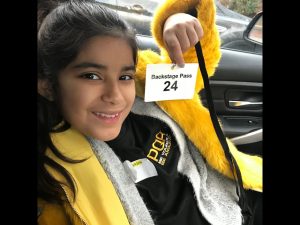 Other news from Swindon

PQA Swindon celebrates their 7th birthday with a massive party!