This term PQA Cardiff AM took on the one minute to save the world film challenge.

Each colour group was split into smaller production teams and given the following brief;

Make a film about something that you believe in

A film that makes us sit up and take notice

A film that blows us away

A film that makes us think

A film that asks questions

Make a film that you are proud of

All of this and it had to be no more than 60 seconds long, including opening and end credits!

Our students produced some amazing films, from mental health in young men to the knock-on effect of one kind gesture.  As always, all the films were filmed, produced, directed and staring our own students and they were all brilliant!

The challenge was open to anyone under the age of 19 not just PQA students in partnership with Children’s Media Conference.  Hundreds of films were entered, and PQA Cardiff are proud to announce that two films by students from PQA Cardiff were selected for the final and premiered in Everyman Cinema Kings Cross.

We couldn’t be prouder of all the films produced, well done Cardiff! 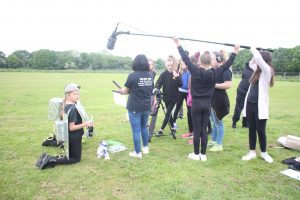