Group Acting Exams with Trinity College London – Distinction Across The Board!

Home | Group Acting Exams with Trinity College London – Distinction Across The Board!

Group Acting Exams with Trinity College London – Distinction Across The Board!

Each of our colour groups worked on devising a piece of group drama to perform to a visiting examiner who graded them on their process and performance. Every group started with a set stimulus and worked together to produce a polished piece to a certain criterion.

With themes from ‘The Elves And The Shoe Maker’ to ‘We’re Going On A Bear Hunt’ to Grimm’s ‘Snow White’ with a twist (song lyrics from Billy Eilish and a modern painting of Snow White), each of the groups gave their own response and performed their scene before having a chat with the examiner to answer some questions on their approach and process.

Every single student did PQA Lincoln proud; with their approach to working as a team and taking on individual responsibility for their contribution, to the way that they conducted themselves on the day. And they were rewarded for their efforts – Each group attained a pass with distinction!

The Principal and teachers could not have been prouder! 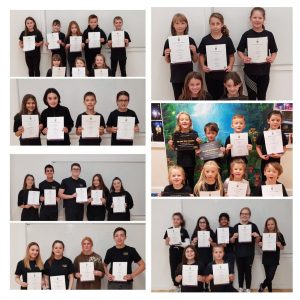 Poppet’s Film Project is a hit!

A True Edge Stage Combat Masterclass, Monologue Slam judging and a visit from a VIP judge!