The audition for the leading role of Michael Hobbs in the UK Arena Tour 2018 of “Elf – The Musical” took place in London on the 17th of June. When I arrived at PQA’s new studio on Pentonville Road, I was both excited and nervous. Along with the other 24 boys who auditioned for the part, I spent almost two hours having my acting and singing abilities closely examined by the Director, Musical Director and a leading member of the cast. I remember that the main focus, and the most difficult part for me, was hitting the high notes at the end of the song, “There Is A Santa Claus”! As time went on, the tension kept on rising as more and more boys were sent home. But, I remained focused and determined to give off my best. I eventually found myself in the last four – the number of boys the production required to cover the tour. However, interestingly, none of us were informed of the final result before we left the studios that day.

Three days later, I was in the middle of a school cricket match when my Dad received the e-mail from QK telling me that I had been cast. As you can imagine, I was completely over the Moon!! We were informed that another boy and I would be doing the five shows in Cardiff and the four in Nottingham, while two other boys would be covering the nine shows in Birmingham. The other good news was that there was an additional part to play – although each of us was basically programmed for the main role of Michael in every other show, there was the minor part of the Macy’s Store Kid which we performed when understudying the main role, so two parts to learn and a performance in every show!

I always wondered why there was such a long lead-time between auditions and the start of rehearsals. In June, the December rehearsals seemed such a long way away and I couldn’t wait to get started. There was also another niggling reason why I wanted to crack on sooner rather than later – what if my voice was to break?! The contract was very clear – if it did, I’d probably be dropped!

I later learned that there’s a very good reason for the lead time. As a child, once you’re cast, you need to be licenced to perform by your local education authority and that process takes time. It also includes approval being sought from your school for any absenteeism that may be required due to rehearsals and performances. I was lucky – my school were fully supportive and, in the end, I only missed 4 school days which were easy to catch up on.

When December finally came, I was so excited and ready to go! My copy of the script and music arrived about 2 weeks before rehearsals – not much time to work with, you might think, what with school commitments as well, but I found that in reality it was more than enough to go over everything I needed to learn and keep it fresh in my mind. Although I received no less than 3 updates to the script in that 2-week period, the alterations were mainly technical ones that didn’t involve my lines being changed. But, of course, once rehearsals were fully underway, the script was constantly being tweaked by the Director and the Choreographer as things progressed, so you had to keep on top of it. My main advice here would be that you learn your lines and songs thoroughly. Most important of all, once you have delivered your line you must remember that that’s not the end of it. You must ensure that you stay completely in character and remember that there are significant differences between performing in a show and a pantomime. The other actors performances rely heavily on you being in character as does the natural flow of the show. Do everything you can to stay fit and healthy to avoid any bugs, especially in winter. It was sad to see, despite her best efforts to shake it off, one of the leading ladies dropping out due to illness at a late stage in rehearsals. However, her understudy did an excellent job in taking over her role for the entire run of the show.

Rehearsals started for me on the 8th of December in Hall 3 of the NEC, Birmingham. It was there and then that I met the whole cast and crew for the first time – they had already been rehearsing for about a week or so. Compared with the theatres that I had performed in previously, the Hall was massive – truly huge – but actually proved much smaller than the Arenas themselves when the space for audience seating was added!

The incredible cast and crew were so friendly and supportive, and offered plenty of advice and guidance, from the Producers, Director and Choreographer, all the way through to the main stars of the Show and the Ensemble. All of them made me feel very comfortable and welcome and I quickly felt at home with their kind words and compliments. They really were a lovely bunch of people. I was surprised to see how many different characters the Ensemble were playing. This meant a great deal of fast costume changes, and people running around backstage a lot, which made for some interesting times behind the curtains! I saw that one of the actors deliberately left it to the very last second to run onto the stage, so that he would be out of breathe for delivering his first line, completely in being for the character he was playing at that moment! Good trick, I thought, except that on one scary occasion he slipped badly and very nearly didn’t make it on time. Phew, steady as you go I then thought, especially as backstage is dimly lit and has loads of trip hazards. It was also a magical experience listening to the Ensemble singing in harmony at the top of their voices backstage, between roles, right beside you, in support of other singers on stage at the time – a truly wonderful sound.

Performing in the shows was simply the best feeling ever. After performing last year in a theatre with seating for about 300, I wasn’t sure how I’d feel standing out in front of an arena-sized audience of 5,200! I just kept in mind another big difference between giving theatre and arena performances – although you are wearing a microphone, you still have to project as if you weren’t wearing one at all! The Ensemble provided a great example of that! There wasn’t any time backstage for any social chit chat – that was for the parties afterwards and they were great too! Waiting to go on, I worked on remembering all of the tiny details of my role and it was reassuring to see the experienced, professional performers doing exactly the same – focusing fully on the job in hand.

It was wonderful to have friends, relatives, teachers and fellow PQA students come along to see the Show and I hope that they all enjoyed their visits back stage during the interval – it was great to be able to share, a little bit of at least, my experience with them.

The Show’s Souvenir Brochure says that “Elf” was the biggest live Christmas entertainment event taking place indoors, anywhere in the world in 2018. It was a great honour and privilege to have worked and appeared with such a wonderful cast and crew in such a fantastic production. It’s all very sad, of course, when the run comes to an end, but there are so many great memories to hold on to. I’ve also made a whole bunch of new friends and we’ve all vowed to stay in touch.

Overall, “Elf” was a fabulous experience and one that I’ll never forget and I carry it forward in my dream of becoming a full-time, professional performer. Of course, I couldn’t have done it without PQA and QK, and I take this opportunity to pass on my huge thanks to all of my drama, music and dance teachers, as well as my agents, for their superb support and guidance throughout the last 2 years. 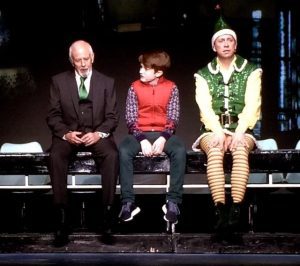 Other news from Swindon

PQA Swindon celebrates their 7th birthday with a massive party!

In December 2017 I had the opportunity to perform in the worlds biggest panto, Peter…