PQA Wolverhampton students had an amazing day at the first PQA
Drama Festival on Sunday, taking part in some fabulous workshops
and performing for their peers.

Held in conjunction with Leicester De Montford University the festival was
especially for older students in the university’s fantastic performing arts
Centre.

Students from several academies came together to take part in 3
workshops provided by specialist tutors, Playing with Text, Physical
Storytelling and Acting through Song from 3 fantastic practitioners both from
academia and practice.

“For our students to learn from such experience is inspiring and gives them
an opportunity to experience what it is like to be a student. Working with
new people in a new environment can be a challenge but these students
will be better prepared for that when it is their turn to head off to university
or drama school,” said principal Julian.

After the workshops students performed pieces prepared to each other and
staff from PQA and DMU. PQA Wolverhampton students performed a
complex version of the Trial Scene from The Crucible with a complete
switch of cast halfway through. “It was huge fun and so worked brilliantly”
said a student, “we have been rehearsing intensely over the last few weeks
and it really paid off today.”

“All of those taking part loved the experience and already are asking when
the next one will be, I think it has inspired some to aim higher than they
previously believed was possible and it is our ambition to help them achieve
this”.

As well as students performing 2 members of the PQA Wolverhampton
team performed monologues to the students, Beth Wesley who will begin
the 3rd year of her BA Acting in September and Jack Howe who has just
won a place at LAMDA.

Principal Julian said, “All of the students from the different academies were
brilliant, supporting each other and adopting an extremely mature approach
to the events of the day. It was fabulous to see them come together and
become a company in just a few hours. The staff were very proud of their
students and those of other academies alike”. 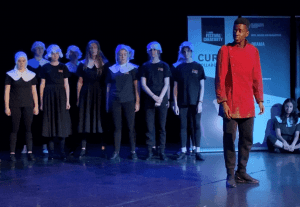 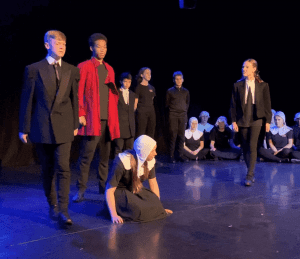 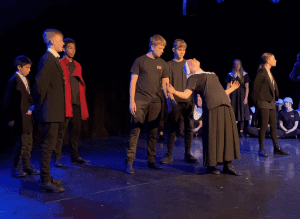 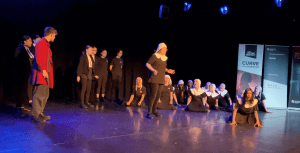 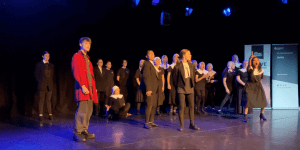