When thinking of a performing arts child, it’s easy to think of the Baby June’s of the world, bursting with confidence and desperate to stand centre stage. At PQA Sheffield there is something for everyone; from singing lessons in Musical Theatre to operating the camera in Film and Television, our lessons are suited to children of all abilities and confidence levels. The children who attend PQA Sheffield all have their favourite thing about PQA, but one thing their parents will sing in harmony is the difference in their child’s confidence since attending PQA.

In our Comedy and Drama classes, our students explore all aspects stage acting, theatre and acting classes for kids. Along with working with scripts, PQA students will frequently work on the art of improvisation, which often involves standing in front of the class alongside their friends and making up a scene on the spot. 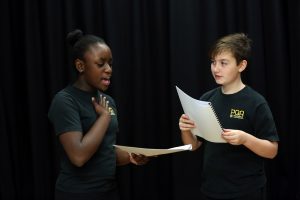 To an under confident child, this might sound pretty terrifying, but imagine this: standing with your friends, being silly and creative, and having all of your friends watching clapping and cheering you on. The confidence a child can gain from activities like this is invaluable, and once they get the buzz they’ll be desperate to jump on stage again. Drama lessons for kids are great fun and before long, you might even find your child trying to get you to act out a scene with them! 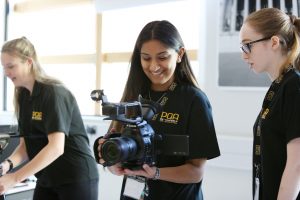 Our Film and Television classes offer a breadth of new skills for children to explore. From learning how to operate cameras and sound equipment, acting in the film, finding and designing costumes to writing your own script, this lesson has something for every child to shine. Teamwork is imperative in creating a film. Perhaps a child doesn’t feel confident enough to act in the film to begin with, but imagine the confidence boost from watching a story you wrote being bought to life by your friends? Then being able to invite your family to a screening where that very same film is being shown on the big screen. The pride and confidence given to a child in these experiences is something that will stay with them for life.

At PQA Sheffield we pride ourselves in creating a family atmosphere which will see a child’s confidence grow. On a free taster session the new children are partnered up with a ‘buddy’, a PQA student who already knows and loves PQA and will show a new child the PQA ropes. The children will stay together for the entire session, and the staff are always aware of a new student to make them feel extra welcome. We love seeing children thrive at PQA Sheffield whilst they’re having fun in a safe environment. If you want to see it for yourself then book a free taster session and see what PQA Sheffield could do for your child.

Other news from Sheffield

So, you’ve got a big audition coming up. It may be for a place in…