We had such a fantastic week and we’re so happy to be able to run our summer workshop.

The week was split between Filmmaking and Comedy & Drama. We had a fabulous time and produced not only an amazing short film but also a play ‘It Could Be Worse’, which we performed at the end of the week to an appreciative audience of family and friends.

Some of the comments after the week showed just how much it had been enjoyed:

‘Thank you. L has absolutely loved this week. The play was brilliant, and I thought the film was outstanding.

‘Thank you, the girls had an amazing week… and the performance and film were just fantastic. It’s great to see what the kids can produce in such a short space of time’.

‘Had a fantastic week, thoroughly enjoyed watching everyone put on a fantastic performance… well done to all’. 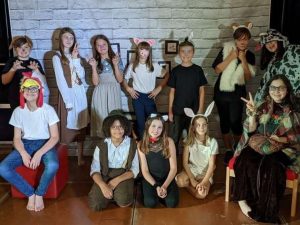 After so long off the stage, we were so excited to be able to share…

There were lights, cameras and posh togs as our students took to the red carpet…