What makes a Poppet at PQA Croydon?

Home | What makes a Poppet at PQA Croydon?

What makes a Poppet at PQA Croydon?

If you’re looking for Drama classes for kids in Croydon, the cutest class with the biggest imagination is our Poppets class at PQA Croydon. Poppets is PQA’s drama classes for four- and five-year olds. These 90-minute sessions are designed to encourage young children to develop performance and communication skills through exploring stories, movement, dance, characters and situations through the use of acting, songs, music, voice, and teamwork. 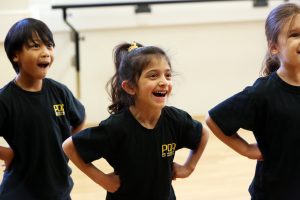 The Poppets at PQA Croydon pack a lot into their classes and are always ready to perform to family and friends, and sometimes a fully packed audience filled with the older students at the Academy! Last Christmas, our plucky Poppets stepped centre stage to perform a special Christmas performance to family and friends and wowed the older students at the Academy with their rendition of festive favourites.

This term the Poppets at PQA Croydon are devising their own performance. This has involved creating their own characters and songs. Along with singing and acting, the Croydon dance school will have our Poppets strutting their stuff in choreographed routines to a special performance to parents. We can’t wait to see what characters the Poppets create.

If you have a child who loves to perform and is looking to join a Croydon Drama School, then contact Principal Natalie to arrange a free taster session. PQA Croydon runs from 09.45 – 1pm on Saturdays at Harris Invictus Academy.