PQA Wolverhampton welcomed the fantastic Kia Pegg to the academy on Saturday. Having met her at Birmingham Film Festival in 2019 principal Julian arranged for Kia to attend the academy and speak to the students answering questions about her work and being an actor generally.

“The students were massively excited to meet her, even the older ones who are only a few years younger. They tried to be cool about it but the excitement was very noticeable. Kia is a perfect example to them of the hard work and attitude required to be successful in life, she was presenting on TV on Friday but made time to come and speak to the students on Saturday spending over 3 hours at the academy”, said Julian.

Kia answered questions ranging from ‘What’s it like living away from home filming’ to ‘give us some advice for auditions’ before having photographs with students and signing the plaster cast of one student who had both legs put in plaster 2 days before yet struggled in to meet her.

The students of the morning academy will be moving on to some amazing projects in the coming months, in Musical Theatre they will be preparing for our incredible West End performance in 2020 (The whole academy has the opportunity to perform in London’s iconic West End at Her Majesty’s Theatre home to Phantom of the Opera in a specially written musical). In Film and TV the group have just recreated a scene from The Dark Knight for a national film competition while in Comedy and Drama they will be preparing monologues for a national competition. 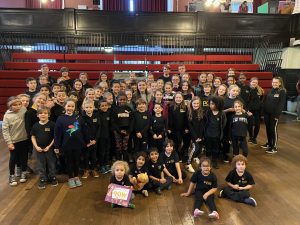