Students at the acting school will be working on monologues over Christmas in preparation to perform to a guest judge in the New Year.

The work is part of an annual competition run by our Performing Arts School nationally with the 10 best performers in each of 3 age groups invited to perform at the Academies Full-Time School in London before an invited audience of Casting Agents, performers and of course Pauline herself.

It is one of our favourite projects of the year, the students love it and we have had a student in the winner’s event on both years it has run so far. It is a good discipline exercise for the students and a way to explore performing in a solo format rather than in a group.

We started working on it a few weeks ago and already we have seen some great work, it can be challenging to let go and bring forth the emotions demanded by the pieces but that is what acting training is all about.

Alongside this the students are working on films and preparation for the West End along with a choir being readied for performance with Mary-Jess Leaverland and Joanna Forest, 2 rising opera stars who have specially chosen to finish their Christmas Tour in Wolverhampton to allow students to perform with them. 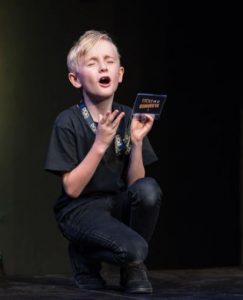