Students from the Academies Green Group came together on Tuesday evening to make their entry for one of PQA’s national film making competitions.

Having chosen a scene from the classic movie Elf the students had picked a scene set in a Christmas store so Principal Julian approached Bridgnorth Garden Centre for permission to shoot in their Christmas department.

The team there were amazing and agreed to allow us to shoot the scene after closing giving us complete freedom to shoot anywhere we wanted. For the students to have the opportunity to shoot in a real Christmas shop was fantastic and inspiring for them. They have been learning the correct way to perform all of the technical roles recently and to see it all come together with children as young as 6 through to 9 running the set was a reward for all of the teams hard work and their dedication in volunteering to put in the extra hours to ensure the students opportunity was able to go ahead.

“The rushes look fabulous and I am very hopeful that we will have achieved our ambition to raise the bar in our filmmaking, Jacob our film teacher who took time out of his master’s work this week to run the set will now edit the scene and ready the work to be seen”.

The scene will be entered into the Academy’s Big Screen Classics competition where students learn about filmmaking by recreating classic scenes, the winning films go on to appear in the academy’s Film Festivals demonstrating the skills the students have learned.

Alongside this, the students are working on a monologue competition and preparation for the West End along with a choir being readied for performance with Mary-Jess Leaverland and Joanna Forest, 2 rising opera stars who have specially chosen to finish their Christmas Tour in Wolverhampton to allow students to perform with them. 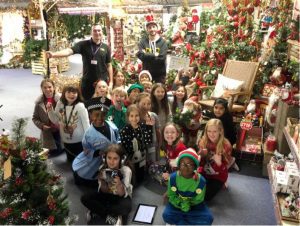