Students of PQA Wolverhampton last week had the chance to
experience a little of what a Degree level course is like.
Academy students travelled with staff to Birmingham to visit the Screen and
Film School at their new premises in the city. They had a presentation about
applying for degree courses, what is required and a QnA about life after
school as well as a fantastic workshop with one of the colleges tutors.
“It was a chance to get a feel for the more grown-up approach of a degree
course as well as hands on with some pretty impressive kit in a studio
setting which they will not have experienced before,” said Julian Elcock –
Principal of the academy who organised the trip. “The college are very new
in Birmingham and only had access to the studio themselves a few weeks
prior to our visit so it was a privilege to have this opportunity”.
During the workshop the students prepared the cameras ready to film
before using lights to create different ‘cinematic feels’ experimenting with
colours, brightness and set-ups.
Film teacher Jacob said “it was a chance to build on work that we have
done in classes using stage of the art lights and cameras, the students
loved it and even those not planning a career in Film learned lots”.
Screen and Film School is part of the BIMM group, the first college opened
in Brighton 20 years ago and they have recently opened new schools in
Birmingham and Manchester… Offering both degree level and diploma (Q
level equivalent) courses.
We are very grateful to them for their welcome and the time taken with our
students.
Further trips of a similar nature are planned in the coming months. 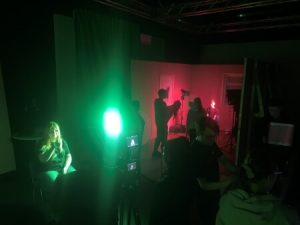 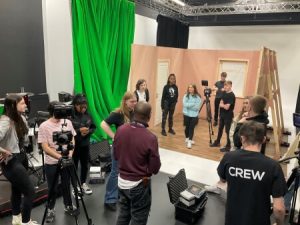